1. It’s a spiritual experience even if you’re not religious or on drugs.

There must be something in that melted-Frappuccino-colored water, since people get philosophical, reflective even a little bit weird on a 21-day Grand Canyon rafting trip.

“I had a little spiritual experience [at Nankoweap Canyon]; I slept outside one night, and I had the feeling that I might want to take a walk with some spirits,” says rafter and roller derby skater Dominique Naccarato. “I had an owl land on a branch above me and start hooting, and then, I sort of freaked out and got scared. I was like, ‘No, I don’t want to go!’ I had a feeling that I could have gone on a little journey there. I wanted to, and I’m not like that. I don’t do stuff like that.”

Nankoweap, which is one of the Grand’s largest side canyons, seems to be ground zero for spiritual experiences since it’s the site where, according to noted Southwest anthropologist, Douglas W. Schwartz, indigenous people settled around 1050 AD and started cultivating maize. The area still has storage granaries and petroglyphs built by the Ancestral Puebloans, who inexplicably left the area approximately one century after they moved there.

“When I was in Nankoweap, the first time I went down, I looked at the canyon wall right across the river from us, and all of a sudden, profiles of ancient Indian faces pointed in a gallery and the profiles were all pointing downstream, downstream, downstream. It was magical,” says Carol Gardner, a longtime boater and kayaker who is scheduled to go down the Grand Canyon  in September 2014 for her seventh time. 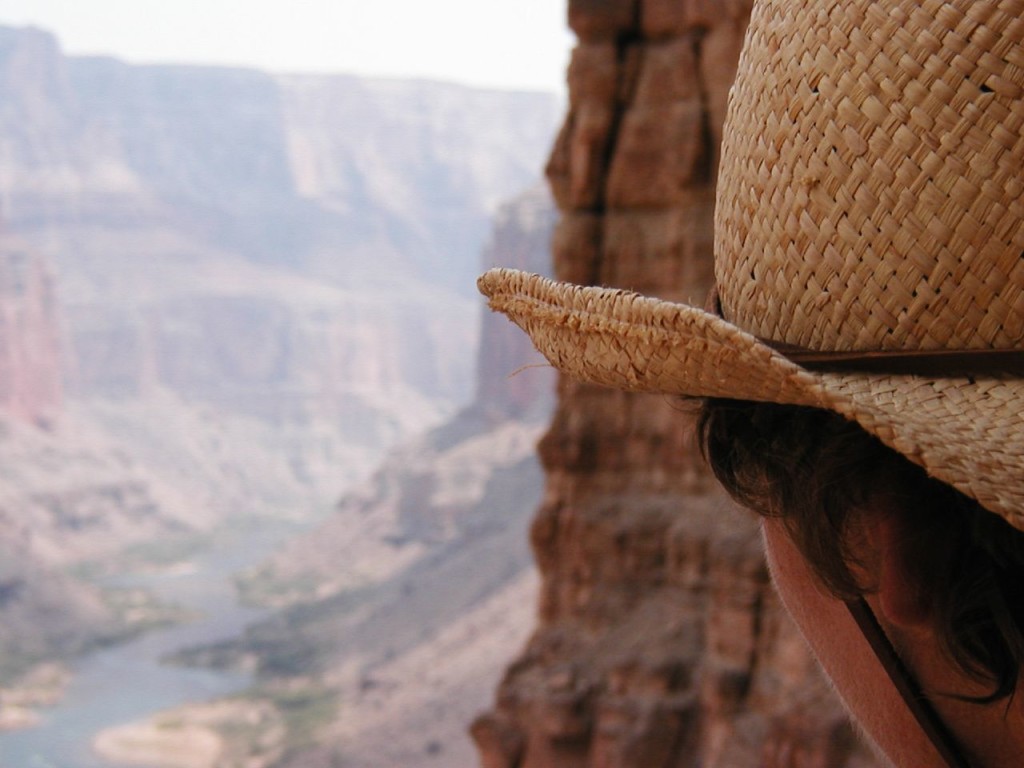 2. You gain Yoda-like perspective and wisdom.

The ancient canyon walls dole out epiphanies daily. Generally, people who have rafted “The Grand” claim they are not the same person upon returning from the trip.

Ron Ferris, owner of RAFTING FRAMES, a custom raft frame building business, first ran the Grand Canyon in 1978 and has since gone 17 times. He rowed six of those Grand trips in a wooden drift boat that he built himself.

“There are so many things in life that are bigger than you are,” says Gardner. “You spend days going through a crack in the earth where you can only see the actual sun for a couple of hours.”

While the Grand Canyon offers enlightenment, its walls essentially act as huge blinders that keep rafters from the news of the “real world.” It may be challenging at first, but being cut off from clutter (e.g. smart phones, e-mail, the internet and social media) allows boaters and paddlers to focus on the present.

“Anytime you can spend an entire month and not know anything that’s going on in the outside world — it’s going to be the greatest month of your life,” says BL Holdinghaus a Colorado raft guide who has rafted the Grand four times.

In fact, Holdinghaus was on a trip during the month leading up to the 2008 presidential election — t­hat meant, of course, neither seeing nor hearing any campaign ads.

“I came off the Grand Canyon, and the election was over,” he adds. “Perfect.”

4. For three weeks, you live in an ancient world.

Sediment, lava, sandstone, limestone and shale contributed to and helped form the roughly forty identified rock layers of the Grand Canyon area. These distinct layers serve as a geological timeline. The Colorado River began its work, eroding the canyon around 5 to 6 million years ago.

“Each day you’re cutting through millions of years of geologic history,” says Gardner who kayaked her first Grand trip.

It’s not just the geology that is ancient. While archaeologists have only been studying the Grand Canyon since 1858, they have uncovered thousands of ancient artifacts including, pottery, figurines, pictographs, rock art, spearheads and tools as well as dwellings. The National Park Service estimates that Paleo-Indians began hunting and living in the Grand Canyon area 12,000 years ago.

According to Gardner, “It has a really sacred feeling to it as you go down through the different Indian sites and hike up through the beautiful waterfalls. You realize that it’s been loved by centuries of people.”

Forget falling backwards into your team-building group and hoping someone catches you. Try scrambling to one side of the boat with fellow passengers to avoid flipping or “wrapping” on a rock— that establishes trust.

Rafting for three weeks on a river for which each day you and your boat mates try to keep the raft upright is a team-building activity.

Maintaining the campground, hiking, swimming and eating meals, also provide opportunities to connect with fellow rafters. At 63, Jeffrey Hammond recently returned from his first rafting experience on the Grand Canyon.

“Everyone takes turns cooking and cleaning, so you bond,” he says.

However, dynamics can become interesting when you’re living in a canyon for three weeks. According to Ferris, the emergence of someone who grates on others typically happens around the fourth or fifth day of the trip. “After about day four or five, if I can’t find the jerk, I start thinking it’s me,” he adds.

6. You get through rapids that can toss your boat like it’s a Superbowl coin.

Horn Creek, Grapevine, Hermit, Sapphire, Big Red, Granite, House Rock, Crystal and Lava Falls sound fairly innocuous, but they can be intense rapids, holes and hydraulics. Every day you must rig your raft to flip, which means securely tying everything down. Although the river is not as technical (with obstacles) to maneuver, river runners don’t make light of the might since the powerful Colorado churns out the big waves.

Because of the variety and strength of the Colorado River’s rapids through the Grand Canyon, a separate scale was created that ranks the rapids’ difficulty from one (easiest) to ten (most difficult). Ultimately, the Grand’s rapids average around class three on the standard whitewater river ranking scale, which goes from class one to five.

“If you run a 10-class rapid and if you’ve never run big waves or water like that before, you come away from the Grand Canyon feeling like you can do anything in life,” says Gardner.

7. You still can’t get over the wow factor.

Visiting the Grand Canyon is a special trip no matter what, and most people see it from the top, looking down or hiking down. Each year, according to NPS, approximately five million people visit Grand Canyon National Park. A much smaller number of adventurers, around 22,000, raft the Grand each year. Not only is the experience of riding down along the river that etched out so much beauty different, but it also can be overwhelming.

“You’re always on your boat looking up. I totally dug it. It’s almost indescribable,” says Hammond.

“It’s hard to get past the wow factor. The magnitude of the place and the rapids, the cold water,” says Ferris. “It’s almost too much.” 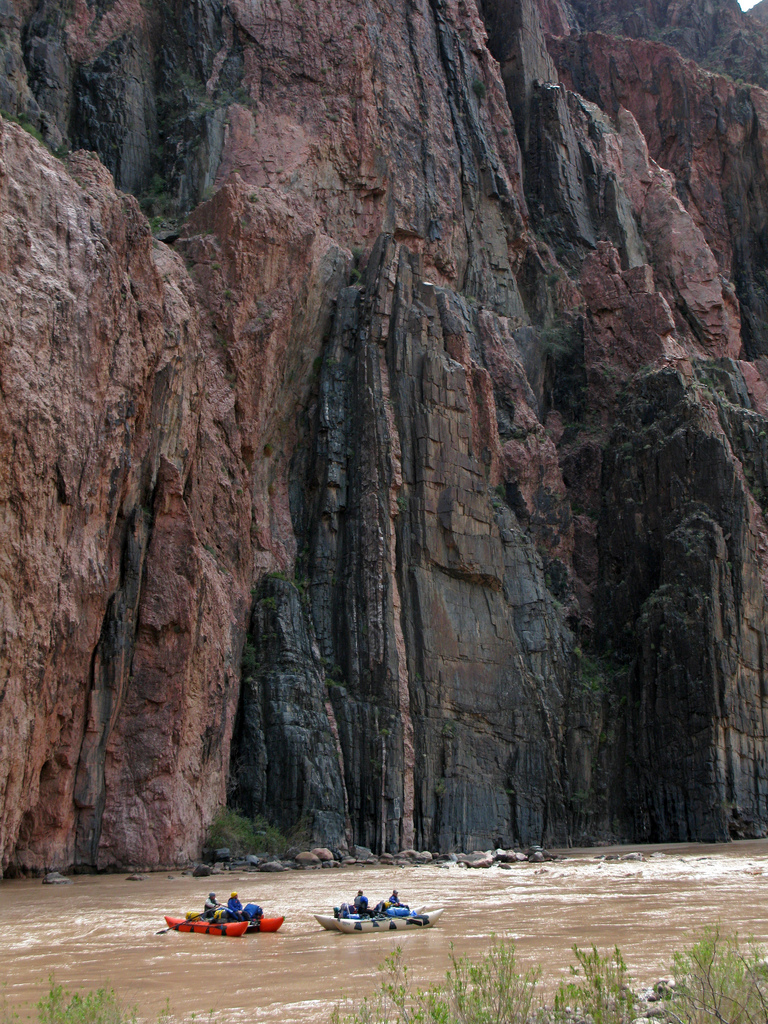 It’s not uncommon to see boaters who just got off a Grand Canyon trip moping around, looking sad. Re-entry is not easy. Everything seems loud, harsh and materialistic. You find yourself zoning out and thinking of a “Grand Moment,” and meanwhile, people who haven’t done the trip just don’t get it.

“You just want to take your car around and go back and put on again with the same people and the same plans,” says Gardner. “I just love that big ditch,” she adds.

For Ferris, getting back to reality became easier after the first few times he rafted down the canyon. Ultimately, he knows he’ll return. “Now, doing a Grand trip is like going home. I’m back and I’m at peace. I’m here,” maintains Ferris.

9. The trip is a huge metaphor for life.

Like any journey, you easily can connect a Grand trip to the big picture. “I learned that, while on the river, what’s smacking you in the face is all that really counts,” says Ferris.